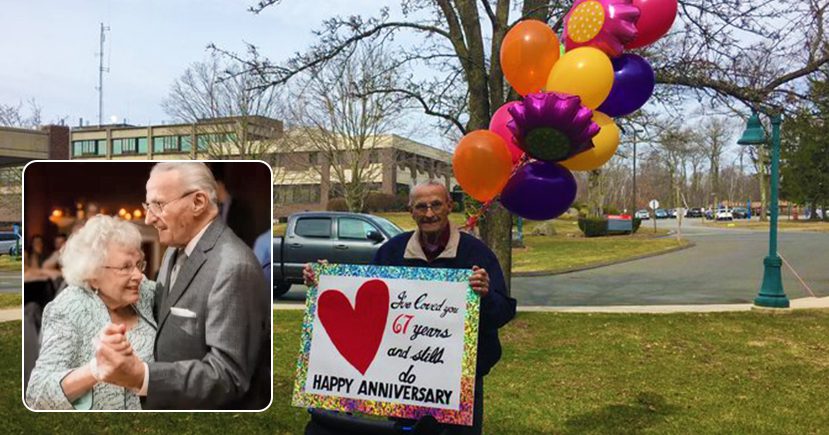 A 67-year-old man from Vernon Connecticut found a heartwarming way to celebrate his wedding anniversary.

For the first time in their marriage, Bob and his wife spent their wedding anniversary apart. Bob’s wife Nancy is in the nursing home. Under normal conditions, Bob visits Nancy at her nursing home daily. But such visitations are restricted now across the state for at least April because of the COVID-19 outbreak. As a result, the pair isn’t allowed to meet each other.

But the situation didn’t let him stop celebrating the anniversary.

On Saturday, Bob turned up outside Nancy’s nursing home with balloons and a placard that read, “I’ve loved you 67 years and still do. Happy Anniversary.” Bob kept it up to his nancy’s window so she could see it and celebrate their anniversary, too.

Nancy replied to Bob’s loving gesture by waving and blowing kisses from the window of her second-floor room. He said that It makes him feel bad because he wants her with him, but he can’t be with her.

Their daughter Laura said she has learned a lot from her parents and all that they’ve shared in their 67 years of wedding. She said this to Laura NBC Connecticut.

Her daughter said it’s just been an example for us, “So all four of us have really learned a lot from them and I can only hope that I have half as much as what they have shared over the years,” Laura said.

They have always been an inspiration to her and she thinks just seeing every year go by that they still express it in some way on their anniversary.- Laura added.

For the 1st time, Bob and Nancy have ever been apart

There’s just a sweetness to the two of them and what they share, – Laura added. “I wouldn’t want anybody else,” Bob tells about  Nancy. “I don’t think she could put up with anybody else besides me.”

The governor banned all visitors from nursing homes for 30 days because of the coronavirus and its impact on the elderly. Before the ban, Bob saw his wife at the nursing home every day.