Facebook
Twitter
Pinterest
WhatsApp
Telegram
A man attempted to drive his car through a crowd of protesters in Washington state. Before exiting his vehicle and shooting one demonstrator with a handgun. Footage showed the man, who has not identified yet. Driving through a protest that was taking place in Seattle on Sunday. The vehicle had seen speeding down a road where George Floyd protesters were peacefully demonstrating. 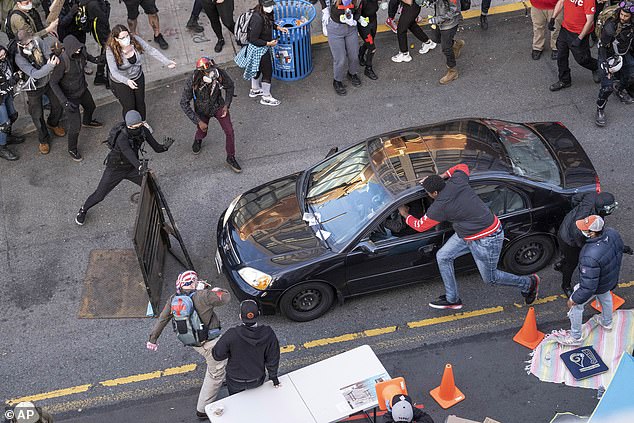 He eventually comes to a stop as protesters run toward his vehicle. A single shot heard and fired from the car as the man fires at a 27-year-old black demonstrator. The bullet strikes the victim, named Daniel, in the arm and sends him crashing to the ground. He caught on camera assisted by medics from the scene with a tourniquet on his arm. He said he knew the gunman. And also added that “I catch him and I punch him in the face. I hear the gunshot go off in my arm… My whole thing was to protect those people down there”.

Story unclear at the moment but young man shot on 11th and Pine. Daniel, 26, wanted to tell his story. With the help of other medics I got a tourniquet on his arm. Street medics were on the spot with gauze and pressure. He walked off the scene. pic.twitter.com/g9Ism58YkF

Dozens of screams heard as the man then rushes out of his vehicle brandishing the weapon. Protesters run for their lives as the man makes his way toward a group of police that was standing nearby. According to the Seattle Fire Department, the man took into custody near 11th Avenue and Pine Street.
The victim had taken to Harborview Medical Center in stable condition. After medics seen treating him before helping him to his feet. It’s unclear if the gunman has charged as of Sunday night. No other protesters got injured during the incident. Thousands of protesters have taken to the streets across the US to show against racism. Police brutality and the death of Floyd. While the majority of protests have been peaceful. Some have turned violent with people burning down police departments and looting businesses. Forcing some city officials to put curfews in place.
Within the past few days, protests have largely been peaceful, prompting officials to lift those curfews. National Guard troops have also been leaving major cities after they called in to help quell riots.
© Copyright© Bullet News