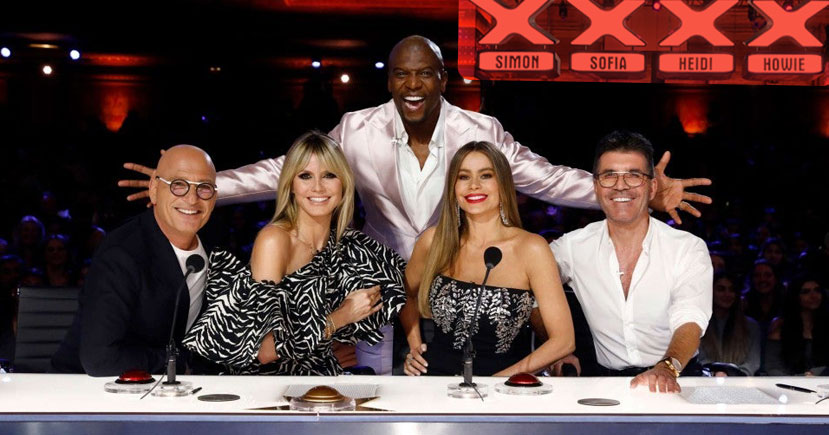 America's Got Talent is giving fans a new look at the famous face at the judges' table. After the announcement that Modern Family star Sofia Vergara will be serving as the judge on the hit NBC reality talent competition, the network releases the first photo of the full cast returning for the upcoming 15th season.

Stalwart judges Howie Mandel and Simon Cowell, as well as returning host Terry Crews, posed alongside first-time judge Vergara. The returning Heidi Klum for a beaming cast photo on Monday. The photo commemorates the start of production on the new season, as audition rounds take place in Pasadena, California, throughout the month.

"I’m so happy to join my new family on AGT," says Vergara -- who is currently wrapping up the 11th and final season of Modern Family -- in a statement. "This is a new and exciting next chapter for me and I’m extremely proud to be the first Latin judge on the show. I can’t wait to watch all the talent and have fun with all you guys!"

The news of Vergara's addition to the cast came last week, along with the news that Klum would be taking her seat once more on the main AGT series. Klum previously served as a judge from seasons 8-13, departing in 2018. She has also appeared on the judging panel for both seasons of the spinoff series, America's Got Talent: The Champions.

The pair's introduction will follow the deafening exit of season 14 judges Gabrielle Union and Julianne Hough. Both of whom exited after just one season amid allegations of a "toxic culture" on set.

ET spoke with Klum at Elton John's annual Oscars viewing party in early February. Where she opens up about the controversy surrounding the show and the possibility that she might return as a full-time AGT judge.

"I feel like people who have been complaining, we should be listening to them," she says. "I have nothing to complain about -- I've only had the best time, and that's my story. Everyone has a different story. My story is a positive one."