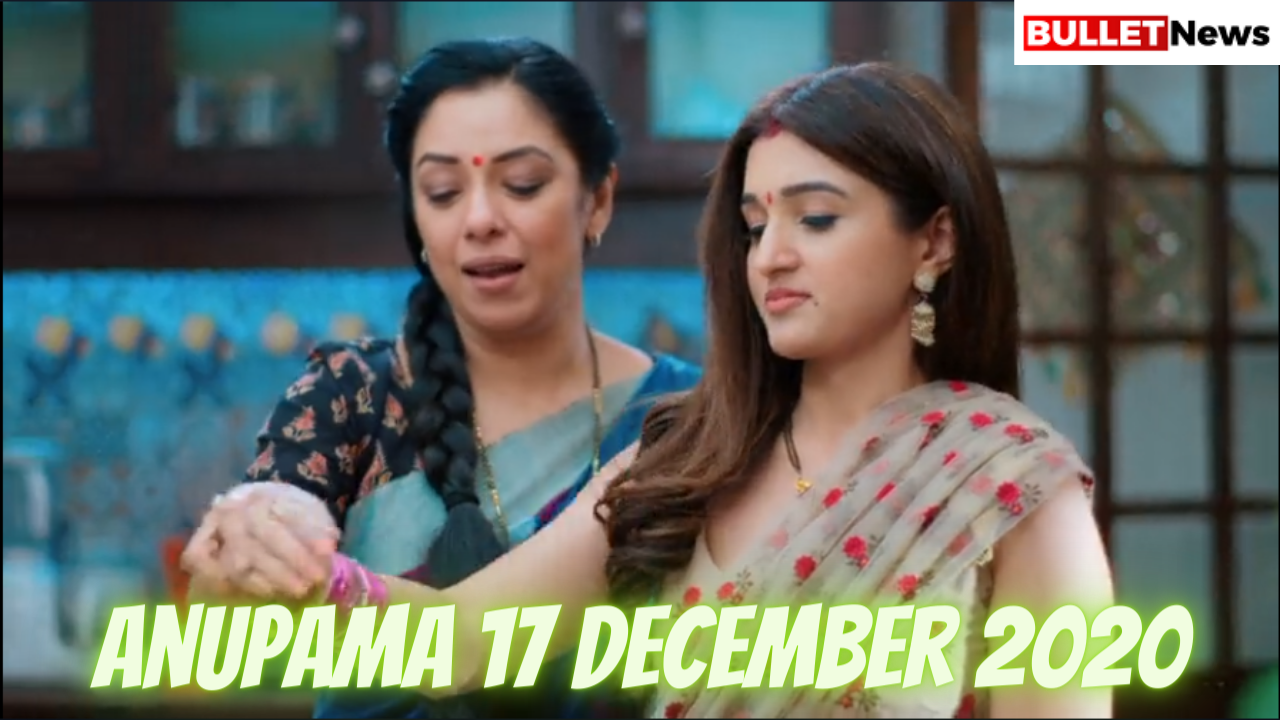 Vanraj said, Okay, fine! Do whatever you want. Vanraj goes away from there. Baa tried to stop him by saying Vanraj! Listen Vanraj! But then also he left the place.

Baa said to Anupama that I agree with Vanraj’s point of view.

Now, it is beyond our capacity to calm the anger of Rakhi. And if you think you can do so, it is okay. But just understand you would be responsible for the consequences. Until now, you have fulfilled the duties of a wife, mother, and daughter-in-law. But now you become a mother-in-law. Your responsibilities have increased by four times.

Baa moves away from there. Anupama remembers her first meet with Kinjal when she said, you are very beautiful, Kinjal. At once, when she said I want to be my daughter-in-law’s friend. You look gorgeous!

Anupama’s title track tune plays in the background, and she is becoming very happy by being a mother-in-law. Even, she remembers just now saying of Baa too.

Anupama said to God, always be there for me through the journey of this new relationship. Do you remember what I told you? She remembers when she told God that I want to be a mother, not a mother-in-law. Then she asked to Bless me, God!

In the next scene, Kinjal is crying and saying everyone is sad and upset because of us. Toshu replied, I know, baby. But, we did not hurt anybody purposely. They had left no option in front of us. Paakhi said, Come on, Brother! We cannot change the happenings. And most importantly, both of you have got married. Now, mummy and papa become angry for one or two days; then everything would be normal.

Samar said Sweety; you do not understand the seriousness of the situation. Brother, both of you have made a mistake. But it would be better to think of the future, right? Kinjal replied, that is what I do not understand. Samar said, sister-in-law, please do not cry. Do not worry. Your mother-in-law is here.

Meanwhile, Anupama came and said, not mother-in-law but mother. She thinks the kids have made a mistake. But at this time point in time, it is more important to console and convince, rather than scolding them.

She said you did not think before making a mistake. So, what is the use of thinking later? The path that both of you have chosen will not be a cakewalk, okay? But since you have chosen it and taken the first step, you have to walk through it. You will have to face a lot of hurdles. But if you stop fearing them, you cannot reach them anywhere. It is very easy to break one’s heart and hard to win hearts. Both of you have accomplished the easy task. ‘now, you have to take the hard one. You have to regain the trust of the people whom you left heartbroken, okay? Both of you are not kids anymore.

Anupama then said, you are a married couple. And married people are always supposed to remember that you can choose to win the fight that is with yourself. But if it is against the family, then lose it. Because that is how you win your family. You have got married and ended up getting your families furious. But now, you have to fulfill the responsibilities of a son and a daughter-in-law. You have won your love. Now, you have to win the family. And I just do not mean this family only. Mrs. Rakhi and Mr. Pramod are our families, too. Both of you must take their blessings, too. Both of you have got married. But it would turn auspicious only when the elders of the family, your parents, the entire family wish you good. 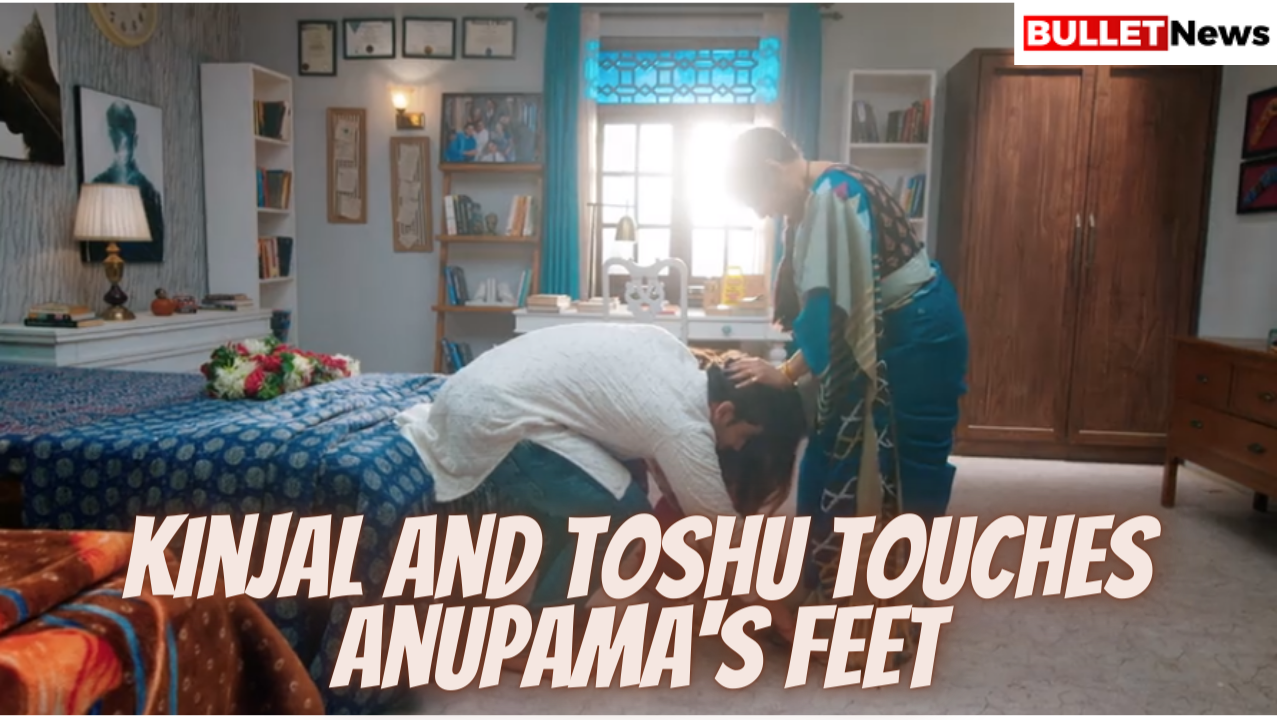 Kinjal and Toshu looked happily towards each other and then touched Anupama’s feet. Anupama blessed them. She said God bless you and Stay happy and hugged both of them.

Anupama said, always remember one thing that I shall always with you in this war of yours. I will be with you through thick and thin. I do not know when we would be successful or if we would ever be. But let us give it a try. Anupama looks at the family picture.

Baa said to Bapuji I did not go out of the house ever since Vanraj is gone so that nobody questions me in the colony. But that snake(Rakhi) came and ruined our reputation. The matter was exposed in the colony. While the entire city is gossiping about it. And the people standing over there were shooting videos and having fun. They must have made it viral by now. We cannot face society anymore.

Bapuji replied you were bothered about the reputation while we were worried about the family. Be thankful to God that Paritosh and Kinjal came back. Had they not returned, Anupama would have got jailed. Baa said I would have been better than suffering the consequences of this marriage. Ever since there has been talked about the relationship, we are facing problems one after the other.

Bapuji said you would not gain anything by getting angry and increasing your blood pressure. You must find a solution for the problem you have got into, Leela. And you will not find one by shouting.

Baa replied I have many problems to find solutions for. My entire world has got ruined. I was not happy when my daughter-in-law was at home. And even now, I was not happy when Anupama’s daughter-in-law came home. I am not worried about what happened. While I am worried about the future happenings. I am not that an elderly woman. But I have the experience. The storm is not stopped yet. A series of problems is yet to begin. We just faced one of them.

In the next scene, Rakhi is sitting along, cutting the cake, and having its large bites. She said my daughter has got married. I must have something sweet. Desserts reverse stress like the same way reverse of Rakhi is revenge (barbadi). Get ready, Anupama! Get ready. All of you have no idea what lies in store for you. 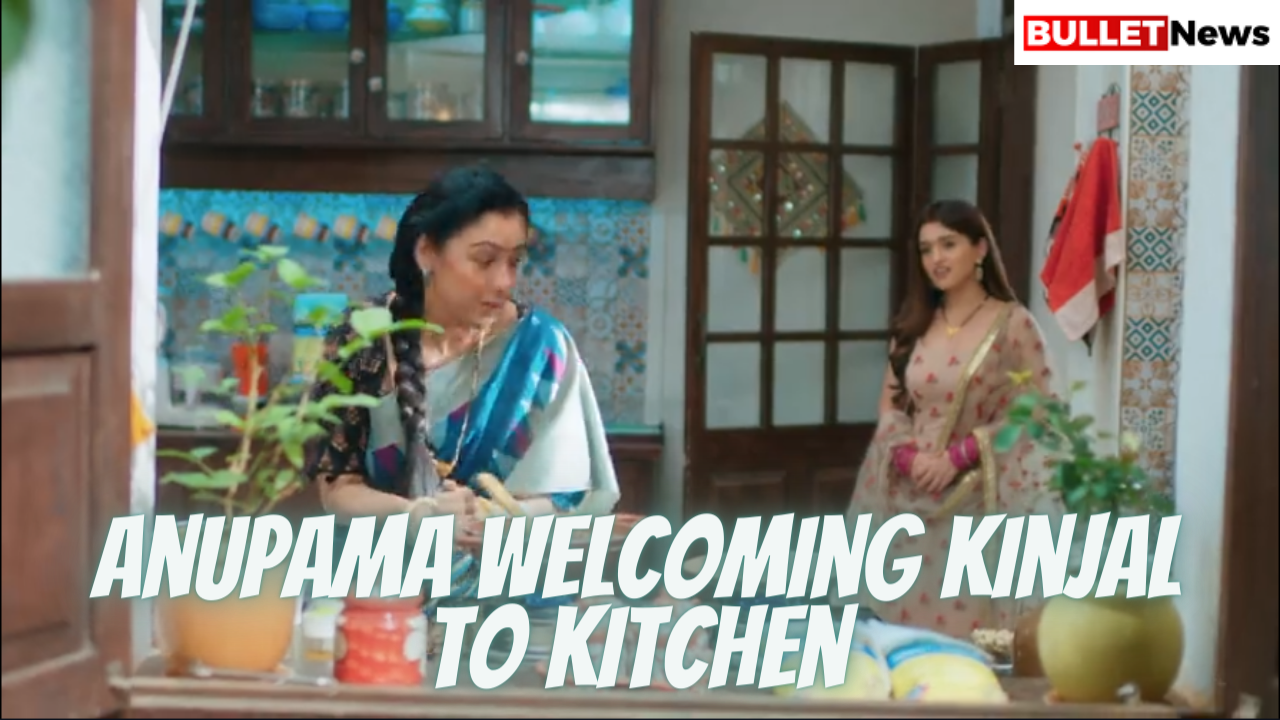 Anupama is working on the kitchen and said, today is my daughter-in-law’s first day in the home. Let me feed sweet to everyone. Kinjal came and said, mummy! Anupama started to glance at Kinjal. She said 25 years ago; the morning was exactly the same. I, as a newlywed bride, entered the kitchen and called my mother-in-law. You are standing at the place where I stood then. And I am standing in the place of Baa. The story is the same. But the roles are different. When a new idol of Goddess is installed in a temple, we perform a ritual to bring it. Similarly, you have entered this holy kitchen in the form of the Goddess Annapurna.

Kinjal said, mummy, What are you doing? Anupama said a mother-in-law has to do this at least once in her lifetime. A girl leaves her house, parents, family, and friends to form a new relationship with an unknown family. She takes each and every responsibility of those people. There are many rituals to show affection towards the newlywed bride. But not to show respect. The ritual is not in practice. But it has to be. Hereafter, you shall represent Goddess Annapurna. I show my respect to the form of the Goddess.

Anupama then said, do remember, dear. If you want to study further or work, no matter if it is your first course or first salary, make sure to follow this ritual. The kitchen is a part of your life but not your world. Your world is really big. Your college, office, work, and your dreams! Do not forget them in the responsibility of the husband and the family. Do not forget yourself.

Anupama said, okay, listen! Baa teaches me that we should always first gift gold to a daughter-in-law. As of now, I have only this. But I promise you that very soon, I shall get you something of your choice. These bangles… Baa gave it to me on my first cooking. Now, they belong to you. Kinjal replied, Thank you so much, mummy. I am not able to understand what to say. I feel so lucky! Even, I do not deserve a mother-in-law like you. I cannot become like you, but I will surely try.

Baa watches them from binocular and said, you cannot make ‘Halwa’ with sweet words. You need to cook it. Anupama replied, yes, Baa. Anupama said to Kinjal, see, I am making this ‘Halwa’ celebrate your marriage. You do one thing put dry fruits in this and add sugar, okay. It will become the first dish cooked by you. Kinjal said, okay, mummy.

Anupama said, but before that, come here, worship the Goddess. She remembers when she did the same. Anupama holds Kinjal’s hand and teaches her how to do it. Wow! that looks so delicious. Now, have this after Lord Krishna, then give it to all. And if someone says anything or becomes angry, then do not get hurt. Okay? Kinjal replied, okay, mummy. Anupama said, Let us go, my beautiful!

Anupama said to take the offertory and keep Lord Kanhaji’s food here. Do it from the right-hand, dear. Bring it here, keep basil leaf, and put it over the halwa.

Bapuji said, Wow! ‘Halwa’ has been made! Kinjal said, have it, Bapuji! Bapuji looked at Anupama for halwa and left it. Anupama said today is Kinjal’s first cooking. She has prepared a sweet dish. So, I cancel your restriction as of now. Bapuji happily has halwa and blessed her and said, here is your gift. Kinjal replied, thank you, Bapuji. 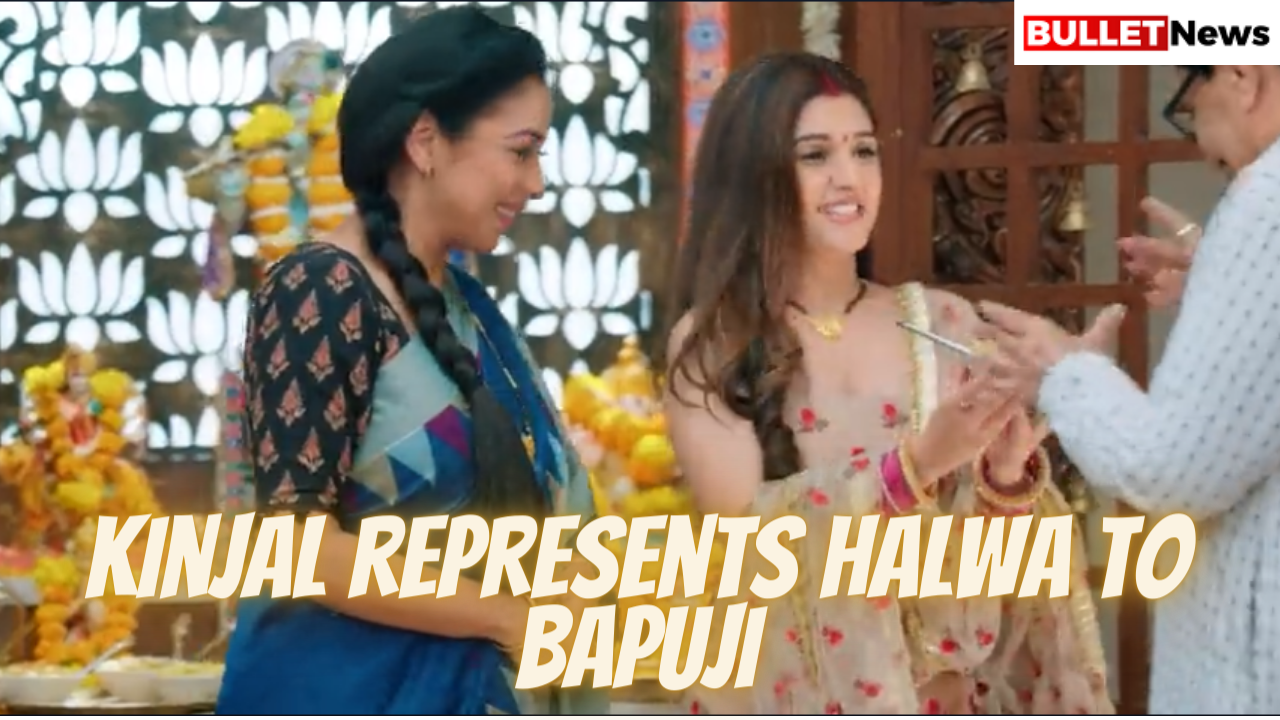 Kinjal brings halwa for Baa, but she goes and sits to the swinger. Anupama indicates her to go there and let her have halwa. Kinjal reached and said Baa. Baa said there used to be a time when girls would learn to cook at their mother’s place. Whereas, nowadays, daughter-in-law just touch and claim they have made it. Anupama said, Baa! Baa replied a mother teaches her daughter to cook. While her mom, the coaching class owner, has only taught her to wear a sleeveless dress like her.

Anupama said, dear, an elderly’s rebukes is a kind of blessing. Kinjal touches Baa’s feet; she replied, let it be. Stay blessed. Anupama said Kinjal, give halwa to Baa. Kinjal said, Baa, sweeten your mouth. Baa replied, after hearing your mother’s bitter words, nothing can sweeten my mouth.

Precap: Anupama said Bapuji and I shall convince Baa. Just go and apologize to her. But before that, you need to apologize to someone else. Vanraj said they think that marriage happens, then everything will be okay. But she is Rakhi Dave, after all. She even tries to ruin their marriage even after their marriage. Kinjal’s father said our daughter had visited us for the first time after marriage. And that too with our in-law. Rakhi shouted, Noo!!