Shah’s family is ultimately in shock after knowing the extramarital affair of Vanraj and Kavya. After seeing them together, everyone is thinking of the previous passed out time. When Toshu knows about Vanraj’s affair, Vanraj lies to him that it’s not like that. Sweety(Paakhi) remembers when she said to Kavya to explain Baa and Bapuji about a boy and a girl can also be friends. Anupama remembers when Rakhi called them to have a resort trip and said they would never forget the trip. Even she said let us meet for dinner at night, and for sure we will have a blast there. 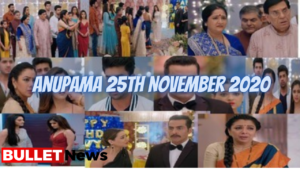 Meanwhile, Rakhi tried to show her views, but Anupama stops her by saying, that this is why you called us here. You know very well that my Bapuji is not well but then also. Rakhi calls Mrs. Shah, and Anupama stops her by saying Stop. Anupama said I told you that you are not going to say anything. This resort is of your friend, but this family is mine, all the children are mine, and Baa Bapuji is mine. And I won’t let you ashamed them in front of everyone. You know about my Bapuji’s condition, but then also you did that.

Rakhi said I am sorry, Mrs. Shah, but I am not like you who tolerate her husband’s extramarital affair. Even hides that in front of everyone. Rakhi said I don’t care who is seeing us? What do they think about us? Like I am not like you(Anupama) at all. Rakhi said yes, all this is mine planning. She said sorry to Baa Bapuji and told them that I planned everything to bring the truth in front of you all. Your daughter-in-law hides this truth from you.

Kinjal tried to stop her mom:

The people and staff who are watching everything there was left the place. Now, only family members are present here so that I can talk right. Meanwhile, Kinjal tried to stop Rakhi, but she said, shut your mouth and let me do what I am doing. She said Rakhi, let’s go. Will talk about all this later, but Rakhi warns her to leave her hand and not be her mother. Rakhi asked Kinjal how you become so blind in love that you are ignoring your father-in-law’s affair. She said I am your Mother Kinjal, and Mother’s are not blind, so let me do what I am doing and don’t dare to stop me.

Rakhi questions Anupama and Dolly what they will do in the case of their daughter?

Now, you tell me, Mrs.Shah (Anupama), if Paakhi will be at Kinjal’s place, then will you marry your daughter at this house where in place of daughter’s marriage, her father-in-law is going for honeymoon. Rakhi asks for an answer. Even she asked Dolly about the same, what will you do in this situation? Will you let your girl marry in this type of house? No right, then how will I do? Sanjay leaves the place with her daughter. He tried to let Paakhi also go, but she refused.

Rakhi continues and says that all you people always say, family family. Today, I will tell you about your family’s truth, which is hidden by your daughter-in-law and son. Rakhi said to Baa and Bapuji that Anupama fainted one day, you know the reason behind that. No right, the reason behind that is she saw his husband romancing with Kavya in her bedroom.

Anupama said Rakhi, please stop all this. Please don’t say all this in front of Baa and Bapuji. Rakhi says, please, Mrs. Shah, I am only saying all this, but your husband is doing all that. When you didn’t stop him, then why you are stopping me here.

Rakhi said Vanraj is such a great person. He married Anupama and going to perform suhagraat with Kavya. She said I understand Mrs. Shah’s condition when she saw her husband with another woman while during her marriage. Anupama again requested her to stop it all. But Rakhi continued and said Vanraj is excellent, and he had an affair for so many years.

Rakhi said she did not want to let you all know all this, but your son is doing too much now. He booked a honeymoon suite in my friend’s resort in Mr. and Mrs. Shah’s name. Even they are spending time like a couple themselves. Vanraj doesn’t care about his reputation, but I think about my reputation. That’s why I did all this. Rakhi said to Toshu, you know, during relation people wants to know about the family. But you have the blood of this shameless man; that’s why I will not marry my girl to you.

This type of characterless man will not be the father-in-law of my daughter. Even if I saw you nearby my daughter, then I will let CCTV footage of this resort viral all over with title Vanraj’s rich hobbies and hashtag Vanraj Shah’s Extramarital affair and loose character.
Rakhi said to Baa Bapuji that they were all very proud of their sanskar; if this is sanskar, we don’t want them. Even we don’t want any relation with such a sanskari people. She told Kinjal to leave and asks everyone to leave as well. Else they need to pay five-star resort’s lakh rupees bills.

The family stands there, shocked and shamed. Vanraj walks towards Baa and Bapuji. Baa tried to extend her hand, but Bapuji stopped her and said, that son makes our drama outside, but we are not that cheap to create drama. Bapuji said to everyone that returns home to everyone right now. Bapuji walks away from there with Baa.

Each family member left the hall:

Kavya said, why, why always I understand the situation? How can you decide everything all the time? Kavya asked, what about me? Vanraj replied, don’t ask me anything right now. All I know is just that I need to go home. She already separated Samar from me, and now she is going to separate me from my family. She will let oppose everyone from me. I have to go home and make everything right.

Kavya said, you know what you need to do; what about me? Vanraj shouted at Kavya and said, right; I don’t have an answer to your any question, and also I don’t have time to answer all this. Vanraj said we must go home before Anupama takes advantage of this situation. Kavya calls Vanraj to stop and then follows him.

In the next scene, Rakhi tries to calm Kinjal: Kinjal moves back and said why mom? Why you did this? Rakhi replied, just for you and any mother will do this. Kinjal said, no mom, mothers show their tension towards the child. What did you do? You make a joke of toshu’s family. You make a joke about my family in front of everyone. Rakhi replied, they are not your family. Kinjal said they are my family, even I am not married to Toshu, but that family is entirely mine. Baa is my Baa, and Anupama mummy is my mother. Rakhi replied, how you call someone your mother in front of me. You don’t feel shame about this. Kinjal replied, you don’t feel shame on insulting them?

Suppose your Anupama is that great, then why is she quiet of her husband’s affair because she wants home security and become Devi. Even your toshu, he knows everything and told you the same. Why was he quiet after knowing everything?

You want to be the daughter-in-law of such a house in which wife and children know about father’s affair. That man is like that after his 25 years of marriage and three children, also affected their sons. Today, the son hides the father’s affair; maybe tomorrow father will hide the son’s affair. That family must thank me for what I did today. Otherwise, all will continue like this. Kinjal shouted over Rakhi and said, her stop all this.

Rakhi said we need to be far away from all this. Whatever you do, it’s confirmed that this marriage will not happen now. Kinjal said she can’t believe this and walked away from there.

Rakhi thought about the taunts of Anupama and her Baa; your husband showed me attitude, and you game me Gyan, but I did only one work and shut everyone’s mouth at once. A middle-class woman like Anupama hides terrible things about their home behind a curtain. But today, I revealed that curtain.

Anupama remembers everything and frightened about family:

On the other side, Anupama is doing the packing for returning home and thinks this would happen someday. But I never thought this would happen like this. A wife can tolerate if her husband brings himself down on her eyes. Still, if the son loses himself in the parent’s eyes or the father loses respect for the children’s eyes, the family gets destroyed if the family gets destroyed. Then Anupama remembers Lord Krishna and said, what will happen to my family?

Precap: Vanraj returned home and looked at Anupama angrily. He walked towards Baa and said Baa. Then Baa slapped him and said I feel ashamed that I am your mother.