Facebook
Twitter
Pinterest
WhatsApp
Telegram
Ben Affleck reunited with his Good Will Hunting costar and co-writer Matt Damon. For a significant cause to honor one of the many black victims of police violence, Breonna Taylor. Along for the meaningful excursion were two of Ben’s children with ex-wife Jennifer Garner, Samuel, seven, and Violet. Matt arrived with two of his kids Isabella and Gia as well as wife Luciana Barroso and a relative. 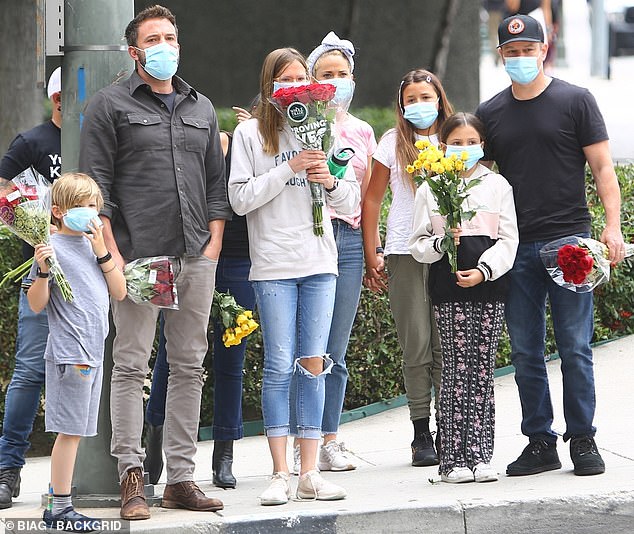 Ben is also dad to Seraphina, with ex Jennifer. Matt and Luciana are also parents to Stella, and 21-year-old Alexia Barroso, Luciana’s daughter from her first marriage. The group held bouquets of flowers that they were on their way to lay at a makeshift memorial for Taylor. On Friday they marked what would have been the 27th birthday of Breonna. A black EMT worker from Louisville, Kentucky who gunned down by police in her own home in March.  Affleck saw in the same outfit he wore earlier in the day for his outing with girlfriend Ana de Armas. A black button-down shirt with the sleeves rolled up below his elbows.
He paired the shirt with some slim grey pants and a pair of distressed brown leather boots. Ben finished the look with a disposable face mask for safety against COVID-19. Violet, who is the spitting image of her mother. She still wore her favorite daughter sweatshirt, and her siblings dressed casually.

Damon donned a black tee that showed off his large biceps, along with blue jeans and black shoes. Affleck and Damon took their kids out for the sign of respect as Hollywood celebrities have moved this week. To take to the streets along with many others in protest of Taylor’s killing. As well as countless other unarmed black people including George Floyd and Ahmaud Arbery.
Ben also took to both his Twitter and Instagram on Friday on the occasion of Breonna’s birthday. With hyperlinks to actionable items, his followers could click on to support causes. Connected to social justice and racial equality.
© Copyright© Bullet News