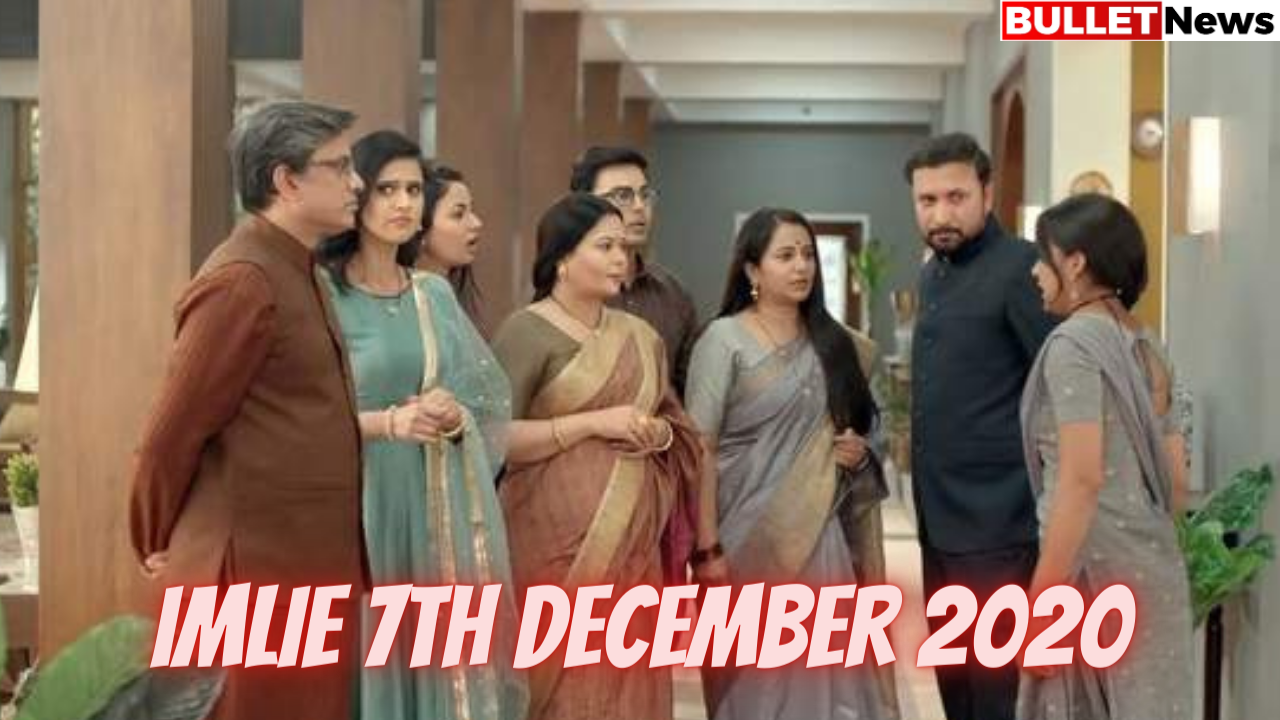 The episode starts with Rupali coming home. Nidhi asks her what happened. Rupali tells Aparna and everyone she got a job at the junior teacher’s post in the school. Aparna notices that Rupali is a little confused and asks her why she looks worried. Rupali tells everyone that she was working on a senior post before marriage, but now it’s a junior post.

Meanwhile, Imlie comes and asks Rupali that what is the size of the TV in the house. Rupali says that everyone has a critical discussion still. Imlie repeats her question. She answers by saying 46 inches. Imlie says that even a 46-inch tv can’t work without a small remote. She tells Rupali that a day will come when that school will not work without Rupali. She further says that a job is not big or small and a school is the temple of Maa Saraswati.

Rupali gets her point and agrees to join the work. She asks Imlie to bring the joining letter from her room. Imlie goes to bring it.

Rupali remembers that Imlie is uneducated and she will not be able to find the joining letter. But surprisingly, Imlie comes with the joining letter in her hand and says that it was her dream to study in that school. Everybody finds out that she can read, and she is educated as Aditya passes from there.

Tauji asks Aditya that did he know that Imlie is educated. Aditya answers yes, and Tauji again says he still brought her for household work. Aditya says she came with him and goes from there. Tauji asks Imlie, will she study if he teaches her. Imlie agrees to it and says that she will complete all work and study at night.

Malini shows Aditya the wedding card she chose. Malini asks Aditya what if the understanding between her and Aditya not remains the same after marriage. Answering her question, she says that they will face good times and bad times, but they will sort the things by talking.

Aditya tells her why she is asking him when she is so smart, and he knows that she will forgive him if he makes any mistake. Malini says that she can forgive him if he comes late from the office without informing her, but if any other woman comes into his life, she will leave the house.

Aditya gets angry and asks her why she always repeats things like this, but Malini calms him by saying she is just joking. Malini tells him that he seems slightly changed since when he came from pagdandiya and asked him if there is any problem, but Aditya denies. Aditya thinks about his lie.

Imlie is cleaning near Almirah when she hears Pankaj saying that he earlier asked a friend for a servant, but since they already have a servant in their home, what should they do. Aparna says that they should send Imlie to the village and let the new servant join.

Imlie gets angry and says she works so hard and she cleaned the windows, and they are shinning. Imlie starts crying as she thinks about what will happen if she returns to the village. Aparna and other family members tell her that they were teasing her, and a servant is just coming to help in marriage works. Imlie gets irritated and says a joke should make everyone laugh, but they made her cry.

Aparna shows taiji a ring that she wants to gift Malini and says she is confused about the ring’s size. She asks Aditya to that ring fit in Malini’s finger, but Aditya says how he will know that. Aparna says that in 7 years, he never held Malini’s hand.

Meanwhile, taiji and Aparna go to take vegetables, and Imlie tries to pull the ring out of their finger. That became tight in their finger, and she tells Aditya that she will remove it.

Aditya helps Imlie to remove the ring by applying vaseline on her finger. Aparna comes and asks what happened. Imlie says she was trying to remove the ring. Aditya says that the ring is right, but the person who wore it is wrong.

Dev brings his mother home while Anu is talking to her friend. Anu is not happy to see her mother. Dev says that his mother will stay with them till Malini’s marriage. Malini comes, and she feels thrilled to see her dadi . Anu asks a servant to put her mother in law’s luggage in the guest house.

Dev tells Anu that his mother will stay with them. Malini says that dadi will stay in her room or stay in the guest house with dadi. Anu allows her mother in law to stay with Malini. Malini says sorry for her mother’s behavior as she may be stressed due to marriage works.

Dadi says she knows Anu and her behavior very well, and it doesn’t hurt her. Everyone writes a poem. Aparna announces that there should be some lines written about Aditya and Malini’s relationship on their wedding card. She says everybody will write something on Ristey, and Aditya and Malini will decide which one should be printed.

Imlie asks about what everyone is writing. Twinkle tells her that everyone is trying to write a poem, but only one poem will come first. Rupali asks Imlie to bring some tea.

Sunny told him the topic is Ristey. Imlie says she will also write and takes a paper. Taiji asks Imlie to look after tauji as she can’t find him in the home. Imlie goes to find tauji, and she caught him smoking. She tells him that smoking isn’t good, and she will tell the family members about it. But tauji tries to bribe Imlie with some snacks. Imlie tells him she will complain about this to taiji, but tauji tells her that he is her teacher.