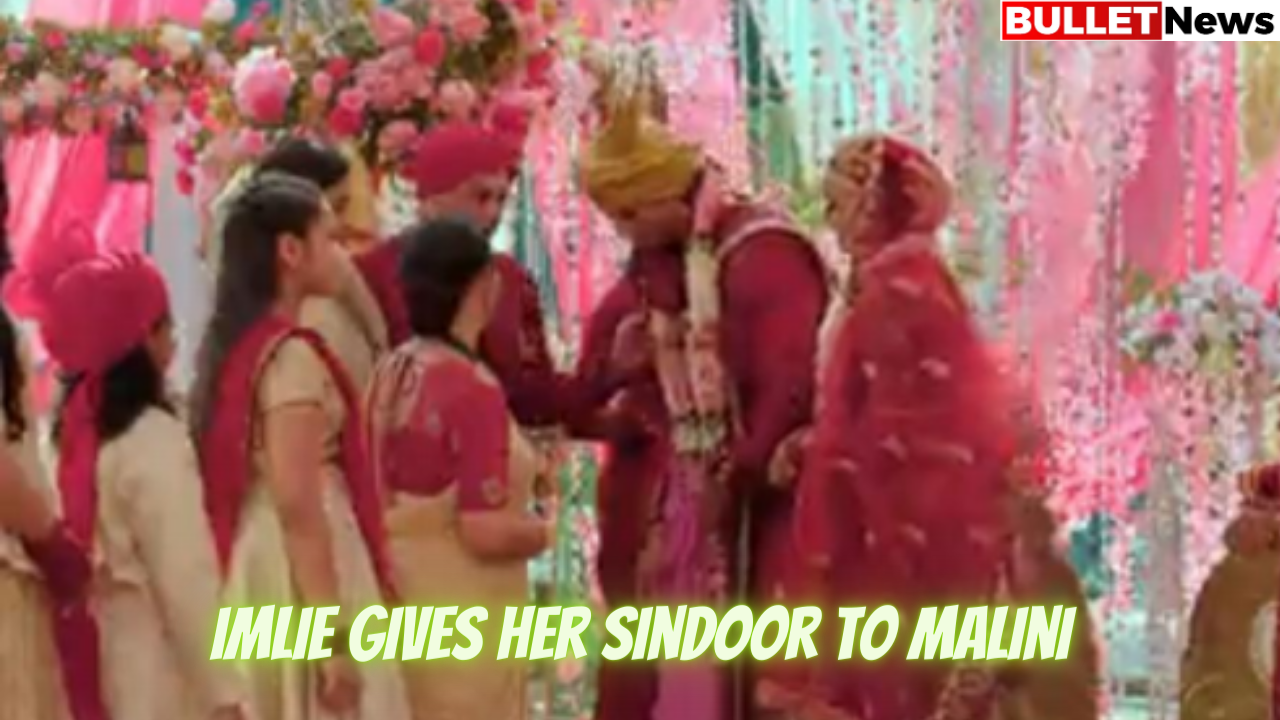 As the episode starts, Imlie is crying alone. She remembers the harsh words that she said to her mother. Aditya comes there. He notices that Imlie is crying.

Aditya asks Imlie, “are you fine ?”. Imlie thinks that Aditya will get angry if he gets to know about Mithi and Satyakam. Imlie says, “I have not called them. They found your address and came here.” She tells Aditya, “I have sent them back to Pagdandiya.

They will never come here again”. Aditya tells Imlie, “you just be quiet”. Imlie asks Aditya, “why are you here? You should get married.” She says that she will give the sindoor to Aparna and leave the place without informing anyone. Aditya says, “you will not go anymore.”

He says to Imlie, “maybe, you have accepted the marriage done in pagdandiya”. Aditya says he can’t accept that marriage because he only loves Malini. He tells Imlie, “I never thought, when you will go to Pagdandiya, nobody will let you live there.” Aditya says, “I realized that you have no place to live; you will live here with us”.

Aditya tells Imlie that she should not stand there alone. She should go near mandap. Aditya and Imlie go near the mandap. A heartbroken Mithi is going outside of the hotel with Satyakam. Meanwhile, Anu and Dev are sending Shashank back home. Anu feels very bad due to Shashank’s actions.

Dev is taking Imlie inside the hotel. Dev feels the presence of Mithi. He feels like he saw Mithi. Dev turns back, and he finds Mithi passing from there. He thinks Satyakam may be Mithi’s husband.

Dev thinks of meeting Mithi, but he looks at Anu. Dev thinks that now his path and partners both are different. He decides he will not meet Mithi. Dev takes Anu near Mandap.

Aditya’s wedding rituals start once again. Pandit Ji calls Dev for some rituals. Dev gives Malini’s hand in Aditya’s hand. Pandit Ji says, “from today, she is your wife.” Pandit Ji asks for Sindoor. Aparna says to Imlie, “I gave you the Sindoor.” Imlie gives Aparna the sindoor, which Mithi gave to Imlie.

Aparna tells Imlie, “I gave you a small Sindoor box; which sindoor is this?”. Imlie tells Aparna, “this is very pure sindoor from a temple of pagdandiya.” She tells everyone that Aditya wanted to bring that Sindoor for Malini.

Dev comes there to meet Mithi. Mithi is very heartbroken, and she remembers Imlie’s words. As Dev is looking at the auto from behind, Mithi looks at the auto’s mirror and notices Dev behind. She asks the auto driver to stop. Mithi gets out of the auto, and she tries to find Dev. Dev goes from there.

Anu hugs Malini. She says, “you have many mothers in your husband’s home. One is the big mother in law while the other is your mother in law. Anu says, “but your real mother is only me. Anu tells Malini, “please, never forget me; I am always your mother.”

She is not able to find him there. Everyone notices that Dev is not there. Anu tells Imlie, “go and find Dev.” Imlie goes to find Dev. Dev is in Malini’s room. He is looking at the childhood things of Malini. Imlie goes near Dev. Dev says, “what are you doing here, daughter?”.

Dev notices that it’s Imlie, not Malini. He says, “Sorry, I thought it’s my daughter Malini.” Imlie goes near Dev. She says, “what are you doing here? Go there and show love to your daughter”. Imlie notices a baby basket there.

He says, “one day, every daughter leaves her father and get married.” Dev says, “now even I have to remember my Malini by looking at her things.” Dev says I will be like a stranger to my daughter. Imlie says, “God makes the relation of parents and child. How can a child do a sin by making her parents strangers.”

Dev says to Imlie, “your mother has given you perfect ordination. He says that you are very intelligent, mature at a very little age. Imlie says Dev “you are also very intelligent and mature.” She says, I will give you the confidence. Imlie says “now go and show your love to Malini. Imlie gives her hand to Dev.

Dev holds Imlie’s hand and stands up. Meanwhile, Anu tells Malini, “if you have any problem in your husband’s house, you may come to me at any time.” She says, “you never need to make any adjustment. I can take care of my daughter whole life”. Dadi tells Anu, “Tripathi’s will keep our daughter as their daughter, not daughter in law.”