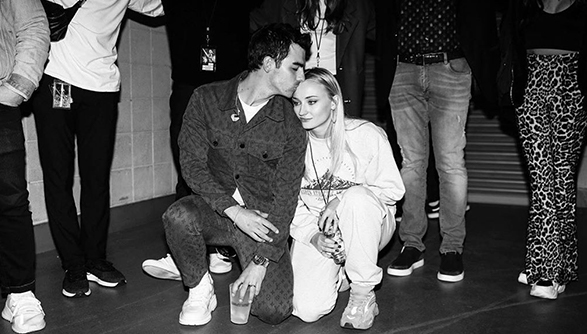 Sophie may officially be a Jonas now, after marrying the singer Joe Jonas in May 2019. But, the 24-year-old, ” Game of Thrones” actress admits that she “hated” the Jonas Brothers before meeting her husband Joe Jonas.

She reveals that initially, she wasn’t a fan of the Jonas Brothers when she was growing up. In her interview for April 2020 issue. There she talks about how she not only wasn’t a fan, but she also went so far as to say she ‘hated them’!

During an interview with Elle magazine, she discloses that she and her friends “were not Jonas Brothers fans.”

“There was this band in the UK called Busted,” she describes. “They had a hit called ‘Year 3000.’ It was amazing, and we were huge Busted fans. Then the Jonas Brothers cover the song and made it massive. And Busted broke up. We thought it was all the Jonas Brothers’ fault. So we hated them.”

The song captures Joe, along the side of his brothers Nick and Kevin Jonas, into the spotlight when they were just teens. Years later, Sophie finds herself in a similar situation when she was cast in the Game of Thrones series at just 15 years old. And although she imagines the brothers to be jaded pop stars. She ultimately finds that she is more similar to them than she would have thought — especially when it came to Joe.

“I went to a meeting and Joe’s agent was in the room. And he was like, ‘You remind me of one of my clients. I bet you two would really hit it off,’” Turner recalls. When the Jonas Brothers were touring the UK later that year, Joe sent the actress a message. this leads to the couple’s first date at a Camden bar.

“The best thing was that he didn’t bring security. He brought a friend and they drank just as hard as the rest of us,” she remembers. “I remember us two spendings only a couple of minutes on the dance floor, and then we found a space in the far corner and we just talked. We talked for hours, and hours, and hours. And I wasn’t bored. It wasn’t contrived, it wasn’t small talk — it was just so easy. Soon, we were inseparable. And then I went on tour with him.”