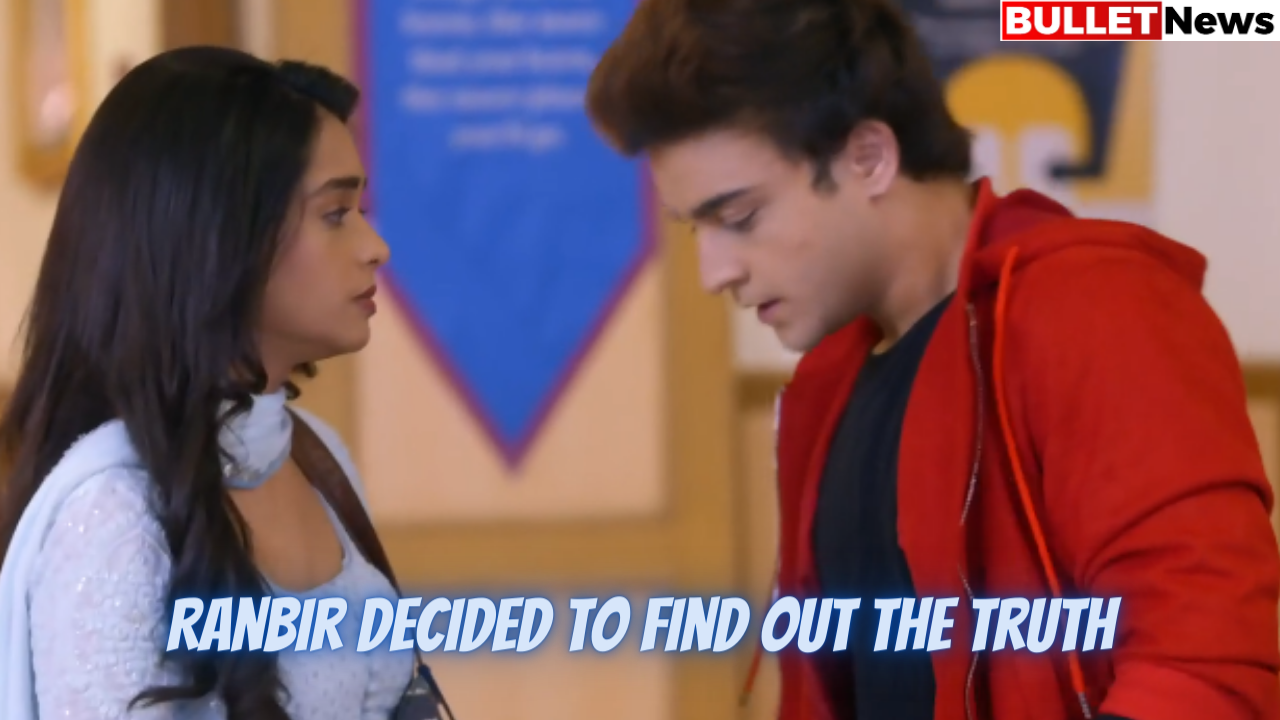 Dadi and Sarita Ji were happy that their plan worked. Riya decided to go to any extent to convince Abhi to say no to this wedding. Ranbir decided to find out the exact reason for the breakup.

When Pragya got down, her pallu got stuck in the car door. When Abhi tried to help her, she reacted. Abhi asked, why are you getting angry? I am doing whatever you wanted.

Then he came closer and asked Pragya if she loves him? Pragya said, yes, I do, and you also love me. Then why do we need to say this? They both got emotional and hugged each other. Sadly, it turned out to be her dream.

However, Abhi came closer to pull her pallu. Meera saw this.

Prachi was very disturbed when she was coming out of Mehra Mansion.

On the other hand, Ranbir and Aryan also reached home and were planning to meet Prachi to know what was bothering her?

Prachi stumbled into Ranbir. They lost in each other’s eyes for a while. Ranbir wiped her tears. He asked her why she was sad? “I know you love me and apologize for raising my voice.

I will never be rude with you ever in my life & I am sorry.” He continued.

It seemed that she would tell him the truth, but she controlled her emotions, gathered herself, and asked Ranbir to forget her in a strong tone. She stopped a cab and left. Aryan suggested Ranbir call Shahana to find out the exact reason.

Sarita Ji and dadi were enjoying a meal. When Pragya reached, dadi hid under a table. Sarita Ji also got nervous. Pragya asked her why was she behaving weirdly? She diverted the topic and asked her if someone dropped her? Pragya said Abhi dropped me. Then she asked Sarita Ji to have a look at the blouse piece to check the quality. Sarita Ji stretched the saree in front of Pragya, and dadi managed to run. Sarita Ji asked Pragya to rest.

Dadi appeared again, and they both were happy to see that their plan worked. Dadi asked Sarita Ji to brief her later about Pragya’s meeting with Abhi. Then she left, considering Pragya should not see her else she would know about their plan. Sarita Ji could see that Pragya was sad.

Riya tried to find out a way to convince Abhi:

Riya was in the kitchen. She was very disturbed because Abhi denied fulfilling her wish. She dropped utensils from her hand. Aliya reached and said, you may harm yourself.

Riya said she had to convince dad to marry Pragya. Aliya said This would bring Pragya here forever. Have you forgotten what she had done with you? She got you arrested on Diwali.”

Riya said, “I don’t care if she stays here. If you don’t want her here than you do efforts to fulfil your wish.” Aliya said I want all this for you.

Riya told Aliya not to worry about her. “I will get whatever I want. Dad will have to cancel this wedding.”

Ranbir and Aryan tried to find out the reason behind the break up:

In the next scene, Pallavi was complaining to Vikram that Ranbir was behaving strangely. Vikram asked her not to get stressed and give Ranbir some space. Pallavi saw Ranbir and called him, but Vikram asked him to go to his room as there was nothing urgent. Pallavi went after him.

Ranbir was calling Shahana, but she was not answering. He told Aryan, “You were right about Prachi. She doesn’t need money.” Then he realized what brought her to the Mehra Mansion? Aryan asked, “Why don’t you tell your father that your mom is completely fine now?” Ranbir said papa loves mom a lot. If he comes to know that she was selfish, he will be hurt.

Meanwhile, Pallavi reached Ranbir’s room, but he usually behaved and asked her to rest.

Aryan asked him to talk to Pallavi aunty about this. Ranbir said she is my mom. Whatever she did, was her love for me. She will eventually understand that my behavior has changed and will talk to me about this. I am already stressed and don’t want to get more. Then he asked Aryan if Riya can be the reason for this breakup? Aryan thought it was impossible because Prachi doesn’t like Riya then why would she listen to her?

Poorab reached Abhi’s room and asked why was he not answering his calls? Abhi said because he was already aware of the conversation, Poorab would do.

Poorab said he met Pragya di, and she had changed a lot. Abhi replied people, do change with time. Poorab said she was looking sad. Abhi told him that she wanted to get rid of him because she is happy to stay without him.

When Poorab tried to convince Abhi more, he said, why do you always favor her and find faults in me?

If she is happy without me, then I will do something that makes me happy forever. Poorab said sarcastically that he could see him happy.

“Everyone is treating me like their puppet. I should do what you all want but why can’t I do that I want? I have decided to marry Meera and that is final.” He said.

When Meera reached Abhi’s room, Poorab asked her why she said yes to marry Abhi when he still loves Pragya?

Abhi told Poorab not to drag Meera into this and asked Meera to go.

Then he reminded Poorab that when he separated with Disha and married Aliya, Abhi remained neutral. Now he should do the same.

Vikram entered Abhi’s room to remind him about tomorrow’s meeting. Abhi said it’s his Haldi Ceremony tomorrow, and there will be no business talk. Poorab left.

Abhi hurt his leg with the bed. When Vikram showed concern about it, he said Pragya had hurt me more than this.

Abhi was left alone in his room and started missing Pragya. The episode ended.

Sarita Ji asks Pragya to save her relationship and confess her love for Abhi.

Will Riya be able to convince Abhi? Will Ranbir find out the truth? Get answers in the next article.