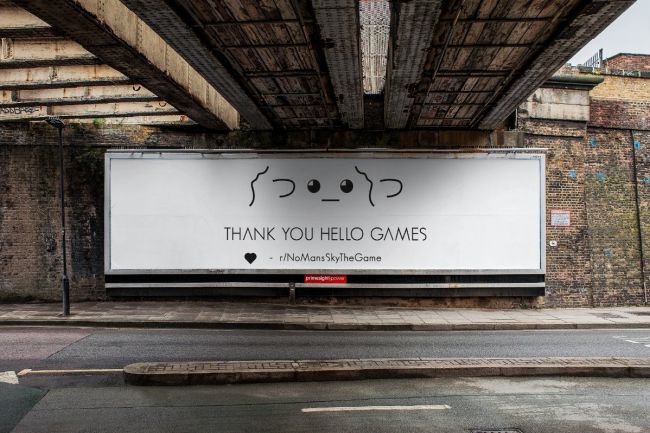 No Man’s Sky was a big letdown for the fans, especially those major hypes from the studio. The launch was a mess, and there were some consumer complaints. The fans have come up with something cool to show their support.

Fans have designed a billboard for the Hello Games; it is created by GoFundMe organizer Cam G. The billboard is a part of a campaign to make fans happy, and the billboard looks to be confirmed and will be posted for two weeks in the coming month.

Cam original idea was to buy Hello Games a few crates of beers and lunch with the surplus money. However, the campaigned has already raised more than $1750 in the first 24 hours. Now they will be using the donated money to launch a “Charity Drive”, which will help sick children play video games.

Cam didn’t think they would receive so much support from the community. Now he wants to use the excess fund to help give joy to sick kids. He will update everyone about the charity drive through the GoFundMe page, Reddit and on Discord.

However, reports suggest there isn’t a formal framework in the process for the charity yet. Cam’s team is still working on the logistics of the idea. This is usually what happens with big ideas and crowdfunding. Organizers don’t expect the level of support they will receive, and the idea is more likely to screw up then.

However, everyone is hoping this ends well. Hello Games had a rough time with No Man's Sky at launch. It is now appreciated by the fans via this billboard. This gesture will bring some goodwill in the gaming community.