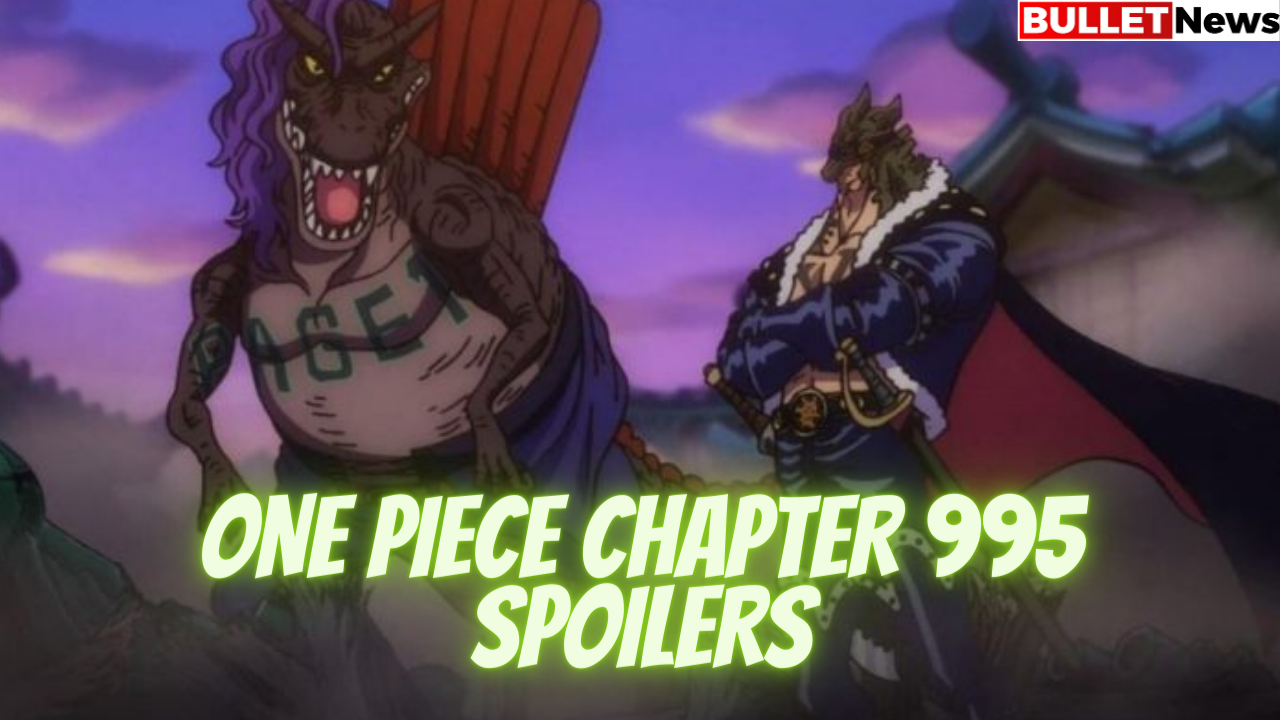 One Piece chapter 995’s complete spoilers were released. Let’s have a look at all of them. Before looking at the spoilers, firstly, we check the manga schedule and all the recent updates related to manga.

However, one piece manga is on a break of two weeks. Hopefully, it will be returned after a short distance of time. It means we will see the one-piece manga on screen after the coming weekend. The show’s fan groups are excited about the return of the show and expect more action to happen this time. As per the story, Luffy decided to take part in Kaido’s fight with Scabbards, but he finds it difficult because some of Kaido’s subordinates are present there in his way. Maybe we will get some time to see all that.

On the other side, Queen has started playing games so that Straw hats will slow down. While we look at Scabbards, it looks to have a tough time against Kaido. So, Scabbards waiting till the time Luffy arrives.

With Redon’s help, we are successful in catching the complete spoilers of One Piece Chapter 995.

As per the new cover story, Luffy is seen relaxing around the class. His teacher is in pain, and his colleagues are the Risky Kyoudai from Thriller shouts (the squirrels).

Marco makes an effort to stop Big Mom from joining the battle with Onigashima, due to which they both fight.

Marco said that he is not known for his role in battle and acknowledges how much Big Mom’s Pirates are threatening.

Promethous’ fire war with Marco’s Pheonic fire. In the battle, Promethous lost because Marco has a unique flame. Big Mom caught Marco from his neck so that Perospero can hit him with Candy Arrow.

By using Sulong form, Carrot, and Wanda attack Perospero. Perospero’s face looks like it is a slip with two marks and has a lot of blood. Wanda said to Marco that they would care for Perospero by themselves. Big Mom got irritated because she becomes busy in small battles and wants to follow Luffy.

Big Mom: “if you eager to kill me then we can solve this later. Right now, I don’t have any soul to use”.

Big Mom sets back on Zeus to Onigashima’s castle. Marco heard the sound of people who are shouting that Ice Omi is coming from the fort.

Let’s came back to Onigashima’s main stage. Brook grabbed Queen’s “Koorioni,” but this let to damage him as he doesn’t have any blood or flesh. Meantime, Queen will look at Sanji’s wanted poster.

Queen: “So the son of Judge is in this crew named Vinsmoke Judge…”

Apoo strikes people running after him with “Don!” go off music. Zoro and Drake strike Apoo all together, but Apoo manages to stop both with a tonfa.

Chopper looked at Brook and noticed Koorioni’s condition, but he also understands that he also grasp it. His one arm is covered with ice.

Nami is in the ground full of blood. Usopp wrestles Ulti and uses “Midori Boshi” Devil” to catch Ulti. He is trying to soften her, but on Page, one eats the plant and then save Ulti.

Usopp then uses “Midori Boshi: take Harpoon” to stick Page One, but Ulti strikes him with a headbutt. Usopp’s head breaks down, and after that, the image appears the same as when he fought with Mr.4 and Miss Merry Christmas in Arabasta.

Ulti takes Nami, tell her that she is irritated with Luffy as he broadcast that he will beat Kaido and become Pirate King.

Ulti” “I will substitute you if you say, “Our Caption will not be the Pirate King!!”

Nami: “Luffy will be the Pirate King!!”

Ulti almost kill Nami, but O’tama and Komachiyo seem out of nowhere. Komachiyo bites the head of Ulti ….

One Piece 995 spoilers for the next chapter will come out early next week.