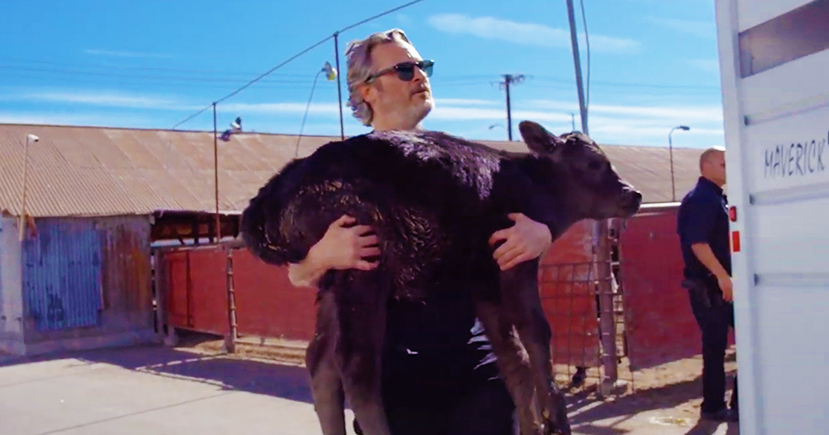 See How Joaquin Phoenix Rescues Cows And Her Calf

Joaquin Phoenix Saves Cow And Her Newborn Calf From a Slaughterhouse In Los Angeles, California. The incident was shared in a video on YouTube by animal rights nonprofit Farm Sanctuary — an American animal protection organization, founded in 1986 as an advocate for farmed animals.

The video starts with a description that the rescue mission “was not planned”.  And then displays Joaquin Phoenix’s conversation with Di Maria, the CEO, and president of the slaughterhouse.

“I don’t need any science to see with my own eyes and hear how an animal responds to pain,” – Phoenix says to Di Maria.

“An animal will perish in less than 60 seconds — it has to. That is the most humane, human harvest process in the country,” – Di Maria clarifies.

“You’re the only one that you know of that has a process that you have, so that means a majority of them don’t have that,” – Phoenix says

Di Maria assures Phoenix that he never takes calves away from their mothers.

“Any time a calf is born on my property, I refuse to take the mother away from its baby,” – Di Maria

Later Joaquin Phoenix also carrying the baby calf into a transport headed to an animal preserve.

Phoenix also christens the rescued cow to “Liberty” and “Indigo” to her calf.

Joaquin Phoenix Also Deliver a Statement With The Footage:

“I never thought I’d find friendship in a slaughterhouse, but meeting Anthony [president/CEO of Manning Beef] and opening my heart to his, I realize we might have more in common than we do differences. Without his act of kindness, Liberty and her baby calf, Indigo, would have met a terrible demise.”

“Although we will continue to fight for the liberation of all animals who suffer in these oppressive systems, we must pause to acknowledge and celebrate the victories, and the people who helped achieve them. Shaun Monson, Amy Jean Davis, and the entire LA Animal Save community have taken their pain of bearing witness and turned it into effective, diplomatic advocacy for the voiceless. As a result, Liberty and Indigo will never experience cruelty or the touch of a rough hand. My hope is, as we watch baby Indigo grow up with her mom Liberty at Farm Sanctuary, that we’ll always remember that friendships can emerge in the most unexpected places; and no matter our differences, kindness, and compassion should rule everything around us.”

In his Academy Award speech, he denounces mankind’s plummet on the Earth’s resources. And also on the treatment of cows in the dairy and meat industries.

“We feel entitled to artificially inseminate a cow and when she gives birth we steal her baby even though her cries of anguish are unmistakable and then we take her milk that’s intended for her calf and we put in our coffee and our cereal.”

The 45-year-old OSCAR winning actor, vegan advocate and activist too does not stop here. He also persuades the Hollywood Foreign Press Association,  to provide its first all-vegan menu this year. Which is administers the Golden Globes,