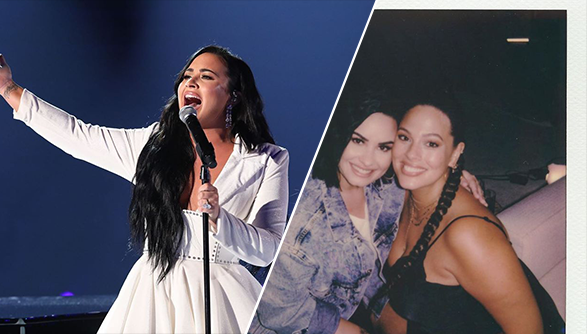 The American singer Demi Lovato accepts the fact about her "extreme" behavior that she applied to her dieting and exercising. She didn't realize that her recovery from eating disorders was going to take her into a fatal overdose of drugs. And her dieting would take her downwards. During an episode of Pretty Big Deal, Ashley Graham's podcast she says "I’m tired of running myself into the ground with workouts and extreme dieting".

My episode of @prettybigdealpod with @ashleygraham drops today💕 I had such an amazing time filming!! Thank you Ashley for allowing me to really open up about my faith, boundaries, my body acceptance journey, and what my future holds. We had such an honest and real conversation... I can’t wait for you guys to watch and listen🙏🏻

She further went to say " I thought the past few years was recovery from an eating disorder when it was just completely falling into it. And I just realized that maybe my symptoms weren’t as obvious as before, but it was an eating issue.”

An eating disorder and self-harm led to Lovato's treatment when she was just 18 years old. After that, she struggles with her sobriety and thinks that she has overcome her unhealthy habits of caring for her body. “It was just like me thinking I found recovery when I didn’t,” she says. She fell into a dangerous pattern of exercising and dieting that she believed to self-care but was not.

This is What I Got

This is my biggest fear. A photo of me in a bikini unedited. And guess what, it’s CELLULIT!!!! I’m just literally sooooo tired of being ashamed of my body, editing it (yes the other bikini pics were edited - and I hate that I did that but it’s the truth) so that others think I’m THEIR idea of what beautiful is, but it’s just not me. This is what I got. I want this new chapter in my life to be about being authentic to who I am rather than trying to meet someone else’s standards. So here’s me, unashamed, unafraid and proud to own a body that has fought through so much and will continue to amaze me when I hopefully give birth one day. It’s such a great feeling to be back in tv/film while not stressing myself with a strenuous workout schedule before 14 hour days, or depriving myself from a real birthday cake rather than opting for watermelon & whip cream with candles because I was terrified of REAL cake and was miserable on some crazy diet shit. Anyway, here’s me, RAW, REAL! And I love me. And you should love you too! Now back to the studio.. I’m working on an anthem.. 🙏🏼🙌🏼🤷🏻‍♀️ also. Just so everyone’s clear.. I’m not stoked on my appearance BUT I am appreciative of it and sometimes that’s the best I can do. I hope to inspire someone to appreciate their body today too. 💗 #nationalcelulliteday #celluLIT 🔥🔥🔥

“I had to work my ass off every day in the gym six days a week to like maintain that figure and it’s just like, that led me only one way,” Lovato explains. She further says “I think what I really needed was someone to come in saying like, ‘Hey I think you might want to take a look at how much you’re working out. Or maybe three times a day is excessive for working out.’”

“I would love to be in a place where I could say I’m super confident in my body. But the reality is I’m not. I just am not,” she says. Lovato notes that the perfect solution of loving yourself and your body is to accept the way our body is.

“I was just running myself into the ground and I honestly think that’s kind of what led to everything happening over the past year...I’m not willing to destroy my mental health to look a certain way anymore,” she says during the episode. “Now I finally feel like I have freedom from it because I literally don’t know my weight and it’s the most free that I’ve ever felt in my whole life.”

About the New Album

She also has a piece of good news for her fans and hints that she is "working on an anthem".

She had a spiritual awakening and this time she has come back strongly. She even inked a tattoo on her neck and posts on Instagram in collaboration with LA tattoo artist Alessandro Capozzi.

The caption reads “We created this piece together to represent a rebirth of the spirit. The dark wings represent the bad times, their fading away is how she moved forward. The light from within represents the inner strength necessary for the change and the doves, pulling her up, symbolize the reach of a higher state of consciousness.”

For the incredible @ddlovato 💖 “Divine Feminine” ✨ Destruction Effect 𝐗𝐕𝐈𝐈𝐈 We created this piece together to represent a rebirth of the spirit. The dark wings represent the bad times, their fading away is how she moved forward. The light from within represents the inner strength necessary for the change and the doves, pulling her up, symbolize the reach of an higher state of consciousness. Congratulations on your inspiring journey Demi, honored to have represented this for you.