Facebook
Twitter
Pinterest
WhatsApp
Telegram
On Monday as cities across the U.S. continue to grapple with violence. Linked to protests over the death of George Floyd and police killings of black people. A day of peaceful protests in the Big Apple gave way to reports of looting at Manhattan businesses. Including the Macy’s flagship store, when the sun went down on Monday. Despite the heavy presence of NYPD officers aiming to prevent destruction sustained the night before. 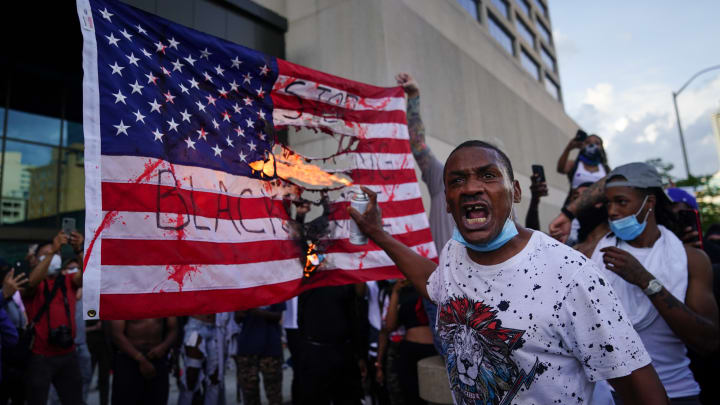 Clashes between police and protesters broke out in many other cities including Minneapolis. Washington DC, Philadelphia, and in the Chicago suburb of Cicero, where two people were fatally shot and at least 60 others got arrested. In Buffalo, New York, a shocking video showed police confronting a group of protesters in the street before a car rammed into officers. Officials said two people got injuries in that incident. Meanwhile, an active-duty military police battalion is making its way to the nation’s Capitol to help patrol the streets.
It came as President “Donald Trump” threatened to mobilize thousands and thousands of soldiers in cities. Across the U.S. to end riots and lawlessness during remarks at the Rose Garden on Monday evening. The US has rocked by six straight nights of tumult since George Floyd. A black man killed in Minneapolis after a white police officer pinned him to the ground by kneeling on his neck.

Floyd, who was in handcuffs at the time, died after the white officer ignored bystander shouts to get off him, and Floyd’s cries that he couldn’t breathe. His death, captured on citizen video, has sparked days of protests in Minneapolis that quickly spread to cities across America.
Trump told the media that his administration is fully committed to serving justice for George Floyd. He declared himself the ‘President of law and order’ and threatened to invoke the Insurrection Act of 1807 to deploy the military. While Trump spoke, police heard firing tear gas and deploying flash bangs to disperse protesters chanting. Don’t shoot in Lafayette Park outside the White House.
© Copyright© Bullet News