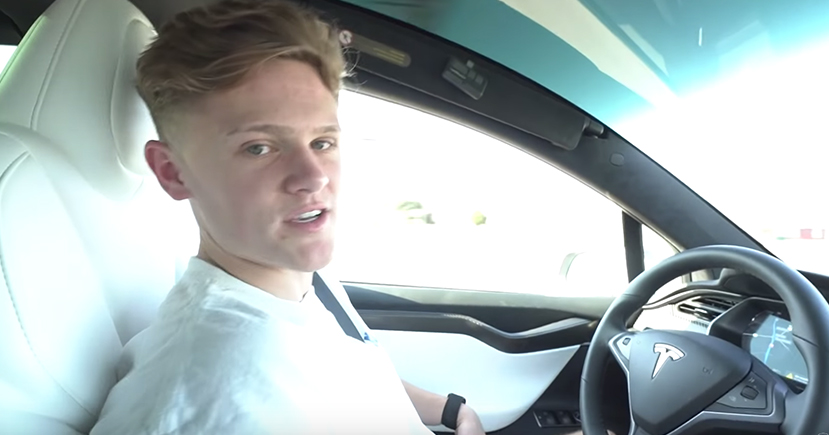 "YouTuber" Ryan Trahan is most notable for his comedy and lifestyle content on youtube. His knowledge and expertise have brought more than 2.2 million subscribers to his channel so far. He gained fame for his videos sharing his background as a runner and he's the co-founder of Neptune Bottle and Hydra Collective.

Recently, he decides to have a road trip from Austin to Chicago that is (1,120 miles) using "Tesla's autopilot" and cite the whole experience on his channel. Before setting off, he estimates that the gas alone would cost about ($220) and the trip itself and it would take about 17 hours, but using the Electronic-Tesla it would need charging which could lengthen the trip by further 10 hours. He starts from Austin and heads out on to the highway where he was able to switch on the Autopilot.

After two hours on the road, Ryan travels (100 miles) down the highway and declares the journey to be 'a blow', as because he doesn't have to concentrate on the road while having Tesla's Autopilot activate. But the feature is not true because every 8 to 10 seconds the driver has to touch the steering wheel to let the car know that the driver is not asleep. Ryan has an application in his cell-phone that informs him that how long the motor vehicle requires to plug-in or to get charge. The journey resumes until he reaches the first charging station around 240 miles into his (1,200-mile) trip. And at each of the charging stations, he found that he didn't have to pay a cent for the electricity that the car needs.

He felt that the recharging stops make the trip more fun rather than stopping at regular gas stations only to get back on the road, in comparison to a regular gas-fuel vehicle. He notices that the single charge of the car would last for 270 miles, each time he filled up, after about 200 miles the battery power began to decrease. He said that " The Charging Stations, should locate next to the highway like gas because otherwise, drivers need to deviate from their route adding time and mileage to the journey. After several more charging station stops and another (250 miles) later, he reaches Chicago in total 28 hours with around 7½ hours devoting to charge the vehicle. By the time he arrives in Chicago after traveling (1,236 miles), it was almost 36 hours since he left for Austin.

Ryan shares his road trip experience as he said.."The cost was free! It cost us zero dollars to cross the country. I put a couple of thousand miles on the car which will depreciate its value but there were no out-of-pocket costs". Ryan also says about E-Tesla that "Autopilot was great on a long road trip because I was able to look around and not feel so mentally exhausted by having to keep his eyes on the road at all times". And also adds that “I would not do something similar until electric cars become more popular with longer battery life and more places to charge”.

What do you think about "Tesla Autopilot"?