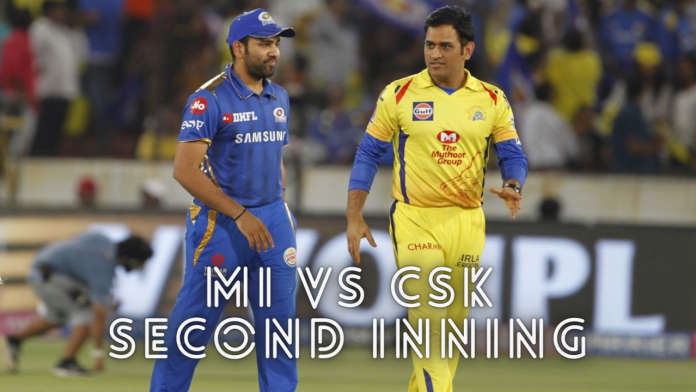 After the first inning of the IPL season opener, at the Sheikh Zayed Cricket Stadium, in Abu Dhabi. In the second inning, Chennai Super Kings came to bat against the bowling and fielding of Mumbai Indians. Umpires for this first match of the total twenty matches that will be held in Abu Dhabi are Chris Gaffaney, Virender Sharma, and the third Umpire is Sundaram Ravi. Meanwhile, the match Referee is Manu Nayyar.

Today’s Line-up for the Second Inning:

Chennai Super Kings‘ line-up for the second inning of the season opener is as follows:

Team Members of the Fielding Team for the Second Inning:

For the second inning, we have Mumbai Indians on the field as fielders, and they have the following team members on the field:

Batting Performance for the Second Inning:

Following is the performance report of the Chennai Super Kings batting in the second inning:

You may also read IPL Match 01, MI vs CSK, The Scoreboard after First Inning?

Bowling Performance for the First Inning:

In the second inning, Mumbai Indians were the ones bowling, and the performance card of their bowler is as below:

The Scoreboard at the End of Second Inning:

At the end of the second inning, we have the scoreboard as:

We have Chennai Super Kings as the clear winner of the first match of IPL by five wickets. Mumbai Indians, the defending champions, have lost the match. May they have better luck next time.

We are eagerly waiting for the second match of the IPL and to tell you all about it. Are you excited about it? Do share your thoughts and excitement about the IPL 2020 with us through our comment section.