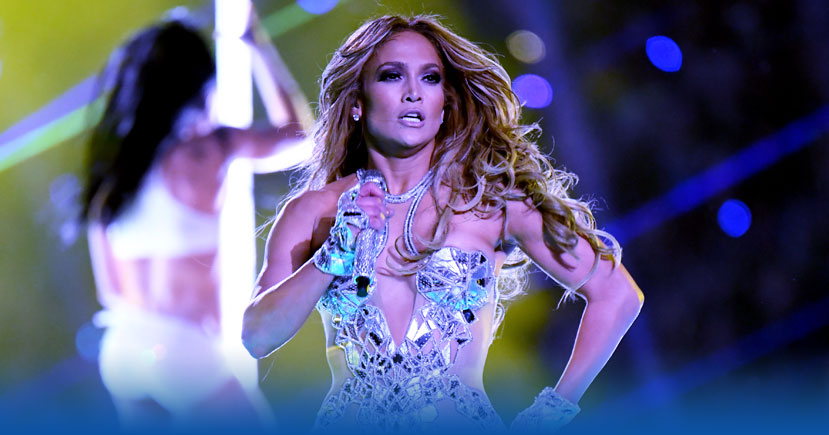 Jennifer Lopez stuns the crowd with her looks and outfit as she handles the Super Bowl LIV halftime on Sunday night (Feb 2, 2020). She proposes a 15-minute performance with the melody of some of her greatest hits.

Her outfit consists of three outfits that were in collaboration with Atelier Versace and Swarovski. But one of her outfits attracts controversy. Because of the custom bodysuit and a coat with white, red and blue feathers.

She wears the outfit on her daughter's, Emme, performance on the song "Born in the U.S.A."

While the coat was an eye-popping fashion statement, animal rights group People for the Ethical Treatment of Animals (PETA) slams the singer by saying " Love Don't Cost a Thing".

This flag could have flown without killing birds.

PETA in a tweet says "This flag could have flown without killing birds". The tweets include the picture of Lopez with the flag coat and next to it a plucked bird hanging on hooks.

Mariel Haenn, one of the stylists on Lopez’s look, reveals that there are 40,000 feathers, in all, each sewn in individually.

LET’S GET LOUD 🇵🇷 @jlo in a custom @versace flag with red, blue, and white feathers. Each star has 40 Swarovski crystals and the Puerto Rican star has 2,000 crystals all individually placed 🇵🇷 #On the Chicas front, things are moving forward quickly! We’re going to be transitioning from an LLC to a Corporation to better accommodate the friends and family investors as well as the StartEngine crowdfunding investors, and I’ll be circulating the ready for signature subscription agreement and wiring instructions in the next day or 2. All I need at this point would be Investing Entity or Individual Name and the investment amount. I’ll handle the rest on our end. Definitely happy to jump on a call whenever you both are available to answer any questions you may have or clarify anything. Let me know.

@jlo's silver-toned bodysuit exemplifies #AtelierVersace's dedication to hand-craftsmanship. The garment creation starts by manually twisting signature Metal Mesh and then beading clear, white and silver Swarovski crystals into a fringe. The metallic fringe is then hand-sewn onto a tulle base and enriched with Crystal Mesh and leather bondage-inspired belts. The monumental banner depicts the United States of America's stars and stripes on one side, and Puerto Rico's flag on the other. All feathers used for the flag were sourced ethically. #VersaceCelebrities #JLo #SuperBowl #SuperBowlLIV #SBLIV

PETA is an American animal rights organisation. It is based in Virginia. It is a non-profit organisation that claims 6.5 million members around the world. Its international president is Ingrid Newkirk. The organisation focus on four core issues. Fur farming is one of the issues that bases upon the new controversy.